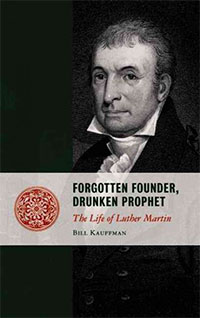 The Anti-Federalist Luther Martin of Maryland is known to us—if he is known at all—as the wild man of the Constitutional Convention: a verbose, frequently drunken radical who annoyed the hell out of James Madison, George Washington, Gouverneur Morris, and the other giants responsible for the creation of the Constitution in Philadelphia that summer of 1787. In Bill Kauffman’s rollicking account of his turbulent life and times, Martin is still something of a fitfully charming reprobate, but he is also a prophetic voice, warning his heedless contemporaries and his amnesiac posterity that the Constitution, whatever its devisers’ intentions, would come to be used as a blueprint for centralized government and a militaristic foreign policy.

In Martin’s view, the Constitution was the tool of a counterrevolution aimed at reducing the states to ciphers and at fortifying a national government whose powers to tax and coerce would be frightening. Martin delivered the most forceful and sustained attack on the Constitution ever levied—a critique that modern readers might find jarringly relevant. And Martin’s post-convention career, though clouded by drink and scandal, found him as defense counsel in two of the great trials of the age: the Senate trial of the impeached Supreme Court justice Samuel Chase and the treason trial of his friend Aaron Burr.

Kauffman’s Luther Martin is a brilliant and passionate polemicist, a stubborn and admirable defender of a decentralized republic who fights for the principles of 1776 all the way to the last ditch and last drop. In remembering this forgotten founder, we remember also the principles that once animated many of the earliest—and many later—American patriots.

This entry was posted in Books. Bookmark the permalink.