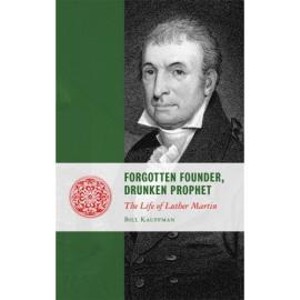 “Vintage Kauffman. A witty, interesting, well researched, highly informative, lively, and balanced account of Luther Martin’s career. Kauffman’s underlying message is provocative, even iconoclastic. Despite all his failings, Martin was foremost among those who perceived that the Philadelphia Constitution contained the seeds for the growth of a gigantic, intrusive, and highly centralized government destined to threaten the liberties of ordinary citizens—a message we would do well to ponder today.”—George W. Carey

“In unsparing detail, Bill Kauffman illuminates the greatest ‘what if’ in American history—the ‘what if’ upon which all others depend. What if the Articles of Confederation had not been superseded by the Constitution? Mired as we are in the received wisdom of Panglossian constitutionalism, a secular religion unto itself, Kauffman’s book makes for bracing and often humorous reading, the kind that demands the reader to think, unthink, and rethink again.”—Ron Maxwell

“Bill Kauffman is America’s staunchest and liveliest local patriot. Here he tells the story of a Founding Father, Luther Martin, who was right about the dangerously expansionist government that the Constitution might allow. For being right, Martin has been vilified and forgotten. But Kauffman, with a fine writerly eye that captures entire the intellectual scene of the debate over the Constitution, assesses Martin’s virtues and flaws evenly, and twinkles all the while. He helps us understand a classic American Anti-Federalist tradition worth remembering, and reviving.”—Brian Doherty

“Brimming with his signature wit and love of language, Kauffman’s Forgotten Founder, Drunken Prophet guarantees that one of history’s notable ‘losers’ finally gets the hearing he deserves. Martin’s alternative America—a lost world of the local, the small, and the modest—has found a courageous and able champion.”—Richard Gamble

“While the trials and tribulations of the Republic’s most eccentric anti-Federalist are well within Kauffman’s purview, this is his first book-length biography, something that could make even the most adoring fans skeptical. But if you enter a skeptic, you’ll leave a firm believer in Kauffman’s versatility. Maintaining the usual wit of his previous offerings, Kauffman treats us to a barrage of quips and insights we’ve come to expect from the folksy patriot of Batavia, New York, all the while keeping an eye on the seriousness of the project at hand. . . . No doubt a book like this is a tall order. . . . And yet Kauffman succeeds as he so often does, hurdling the mountainous myths of history with ease, and painting a sympathetic portrait of a cause lost, but now at last, not forgotten.”— Dylan Hales, Charleston City Paper

“Kauffman’s latest offering Forgotten Founder, Drunken Prophet: The Life of Luther Martin proves not only his mettle as a formidable researcher and archivist, but foreground his relentless awareness of the hermeneutical dimension of history. Without sacrificing cogency and maintaining a consistently cool voice, Kauffman plumbs history in its diffuseness to round out historical models. . . . Kauffman never thinks he is revising an inappropriate history, but rather sees himself as extending our current knowledge of the Constitutional Congress and the subsequent 18th century. Never the explicit apologist, Kauffman delicately and humorously weaves a more complete portrait of Martin. . . . [I]t becomes apparent that Kauffman is not just writing a story about a forgotten founder, he is writing a story about Anti-Federalism and the nature of history at large.”— Erik Hinton, PopMatters

“Kauffman doesn’t flinch in offering this judgment. His aim is to rehabilitate Martin, not to prettify him. One of his most impressive feats is to make his subject sympathetic even after relating the ugliest moments of Martin’s life. . . . Kauffman…is today one of [Anti-Federalism’s] most eloquent modern spokesmen…By letting us into the mind of one flawed, fascinating, and ultimately tragic figure, Kauffman has not just reminded us that Luther Martin of Maryland deserves a place beside the other giants of the founding generation. He has made a compelling case for a disreputable but worthy movement, for the men so committed to what we now call constitutional principles that they refused to accept the Constitution itself.”— Jesse Walker, The American Conservative

“It figures that local patriot Kauffman is skeptical about the Constitution… Kauffman, the liveliest conservative wit of our time, tells Martin’s story with great relish and principled rue for federalism lost.”— Ray Olson, Booklist

“The Anti-Federalists are often seen as parochial, self-interested dimwits obstructing an epochal achievement. With Forgotten Founder, Drunken Prophet, Bill Kauffman launches a full assault on this caricature. . . .a major theme of his book is that men, not all-wise demigods, wrangled over America’s future in the summer of 1787, and he is delightfully enthusiastic in his iconoclasm. (Particularly amusing is his openly malicious treatment of Madison and Hamilton.)… This playfully written, highly entertaining book will probably not inspire a new constitutional convention, but, if it convinces some readers that critical and unsentimental examination of the nation’s founding need not be unpatriotic, it will have performed a valuable service.”— Stefan McDaniel, First Things

“In Forgotten Founder, Drunken Prophet, a short and engaging biography of Luther Martin (1748-1826), Bill Kauffman shows us a sot, a quarrelsome bore, a butcher of the English language, an outspoken abolitionist who himself owned slaves—and a man who advanced opinions at the Constitutional Convention that desperately needed to be heard. . . . Mr. Kauffman tells this harrowing tale with a proper recognition of its farcical elements. He is a rollicksome stylist. . . . But throughout Mr. Kauffman shows a sympathetic regard for his subject. An appreciation of Luther Martin is perhaps overdue; a respect for the Anti-Federalists certainly is. Both ends are well served by this entertaining and instructive work.”— Alan Pell Crawford, The Wall Street Journal

“For a political junkie, the collected works of Bill Kauffman are the gateway drug to all things off limits. Emphasizing the ‘character’ in ‘character sketch,’ the typical offering from Kauffman is filled with witticisms and quirks of history ignored or discarded by ‘consensus historians.’…Kauffman’s fight has always been for decentralized power, community control, and individual liberty.”—Dylan Hales, Young American Revolution