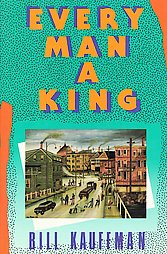 “Witty and sarcastic, and, at the same time, naïve and innocent…an unusual mixture of irony and optimism”—Booklist

“His pen, dipped as it is in Mencken, has a pleasantly wicked touch”—Jonathan Yardley, Washington Post

“Kauffman…is in the tradition of H.L. Mencken. When he gets rolling he possesses some of Mencken’s verbal magic, as well as his wit and capacity for being entertained rather than depressed by what he scornfully observes”—Theodore M. O’Leary, Kansas City Star

“Kauffman’s novel is a song of Western New York…a bright contribution to American literature and a signal addition to that large and growing corpus of works that are peculiarly New York—Wendell Tripp, New York History

“it is both sad and inspiring; Batavia is dead, but Batavia lives on. It is also…very, very funny.”—Jesse Walker, Liberty

More about Every Man A King, by Bill Kauffman