ABOUT Dispatches from the Muckdog Gazette (Henry Holt/2003; ppb. Picador/2004) 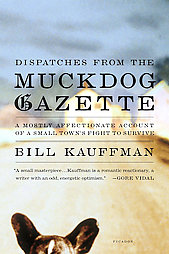 “A small masterpiece…Kauffman is at his most illuminating when he bears witness to the ‘progressives’’ wreckage of [Batavia], the razing of its beautiful houses, the cutting down of ancient trees in order to create a vast mall that promptly fails. Kauffman is a romantic reactionary, a writer with an odd, energetic optimism”—Gore Vidal

“Books about small-town America are usually a mixture of heartwarming treacle, homespun balderdash, and old-fashioned hooey. Not this one. Kauffman writes with both honesty and affection about his hometown, sometimes praising it, sometimes giving it hell, sometimes gasping in disbelief at the stunts his knuckleheaded neighbors pull off. At long last, Batavia, N.Y. has its Garrison Keillor.”—Joe Queenan

“May this rude, snarly, tender, and fiercely loyal volume be the first in a raging new category of work called home lit”—Carolyn Chute

“God bless Bill Kauffman and Batavia, New York, for not adding up and falling into line. In a culture of rote political idiocy, this witty, learned author and his beleaguered hometown have managed to keep themselves crosshatched, crotchety, and—to some embattled extent—free. Oh, for this place where the artists can be Republicans and the right-to-lifers Democrats! Kauffman thinks and feels as a man fully awake; he writes like a dream.”—Thomas Mallon

“A great book…bereft of nostalgia yet defiant in its ‘placeism.’”—Robert Westbrook, Raritan

“In extolling Batavian particularities, Kauffman combines acidic denunciation of civic shortsightedness with affection for the town. This technique has an entrancing effect: the skein of town society, from the habitués of the cafes to the local congressman, unwinds a panoramic civic fabric one can’t resist.”—Gilbert Taylor, Booklist

“a wryly affectionate account of returning to small-town America. Kauffman is too intelligent and perceptive to be a starry-eyed civic booster, but in these richly allusive dispatches he makes a strong case for staying home…Politically incorrect, always honest, and buoyantly upbeat; joyous celebration of place.”—Kirkus Reviews

“The disintegration of small-town America in the Big Box Globaloney onslaught of recent years is a silent slow-motion tragedy that Bill Kauffman writes about with keen insight, wit, and affection.”—James Howard Kunstler

“There is myth and poetry in this refreshing look at a town…Kauffman is one of the most original journalistic voices in America today”—Alan Pell Crawford, Richmond Times-Dispatch

“Wry accounts of small town life…are blended in with a sharp critique of how so-called progress messes up perfectly nice places like Batavia.”—Jay Walljasper, Utne Reader, “A Few of Our Favorite Books”

“Kauffman…stir[s] up a longing for a hometown of one’s own.”—Susan Salter Reynolds, Los Angeles Times

More about Dispatches from the Muckdog Gazette: A Mostly Affectionate Account of a Small Town’s Fight to Survive, by Bill Kauffman