ABOUT Ain’t My America: The Long, Noble History of Antiwar Conservatism and Middle-American Anti-Imperialism (Henry Holt/Metropolitan/2008) 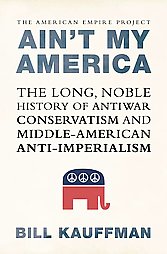 “For those who have been neoconned into believing that conservatism means unquestioned support for the warfare state, Ain’t My America is the perfect way to show that real conservatives defend peace and liberty.”—Ron Paul

“Here begins the effort to restore a principled conservatism after the havoc wreaked by George W. Bush. Bill Kauffman is a terrific writer and Ain’t My America is a terrific—and essential—book.”—Andrew J. Bacevich

“You don’t have to be a liberal, a progressive, or a socialist to oppose war and imperialism. Bill Kauffman’s Ain’t My America is a must-read for those free marketers, right wingers, and conservatives who want to live in peace with the world. Regardless of your politics, if you are against wars of aggression and would like to try something other than bombing our way out of our problems, you will profit from this lively book.”—Nicholas von Hoffman

“This is my kind of book: historically grounded, fiercely honest, and wonderfully expressed, one of the best I’ve read in years. Bill Kauffman is a conservative of the highest order, unlike the false brand now conducting our national affairs.”—George McGovern

“witty, informative, humorous, and irreverent…His style, however, in no way detracts from the central themes of his book that concern matters of profoundest import…could even serve as required reading at both the high school and college levels in those courses dealing with America’s role in the world…Kauffman deserves great praise.”—George W. Carey, Modern Age

“It’s a funny, bracing book that falls outside of conventional political thinking, but in direct line with those consummate foes of empire—the founding fathers.”—Thomas De Pietro, Barnes & Noble Review

“A subtle and deliberate intellectual, Kauffman is not only a critic of American statism and its attendant foreign interventionism, a talented journalist, and an accurate historian, but also a gifted writer…he is also the most amusing political-historical-cultural writer pounding the keyboard in America today…Ain’t My America is the most important book on American history and politics published this year.”—Robert Cheeks, Internet Review of Books

“Bill Kauffman writes prose—history, novels, journalism—but he is a poet and a prophet.”—Daniel McCarthy, The American Conservative

“if I were looking to transform a neoconservative into a normal human being, Ain’t My America would be one of the first books I’d hand him in my proselytizing mission.”–Thomas E. Woods Jr., Takimag.com

“Flexing his vocabulary to the max, scattering sarcastic asides like confetti, and upholding the banner of home and family, Kauffman’s new essay in American historical archaeology is, like its predecessors, an eye-opening delight.”—Ray Olson, Booklist

More about Ain’t My America: The Long, Noble History of Antiwar Conservatism and Middle-American Anti-Imperialism, By Bill Kauffman